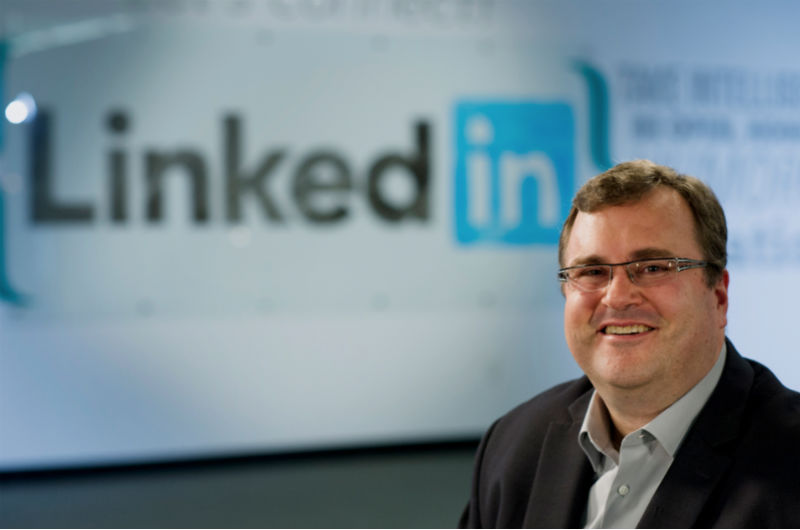 In October of last year Reid Hoffman posted LinkedIn’s Series B pitch deck from 2004. He packed it full of some great lessons, and a bunch of people commented on it and analyzed it.

And why not? Who doesn’t want to learn from someone as successful as Reid Hoffman?

Here’s the thing though, I don’t know about you, but when I read advice for startups (like pitching), my mind always turns to the million reasons why my situation is different.

“But we’re not a social network…We don’t have the users they have…Ugh, how am I going to get past that…(downward spiral)…they’ll never fund us….we’re going to run out of money….I’m going to lose my hipster office in the city…forget it, my life is over.”

So here’s what I thought would be a more helpful analysis of LinkedIn’s Series B pitch deck.

I noticed that Reid Hoffman uses 2 powerful principles of persuasion that are outlined in a super famous book by the renowned psychology professor Robert Cialdini that can be applied generally to any startup pitching themselves, and even more generally to any sales situation at all.

If you’re trying to convince, persuade, sell, or influence anyone right now, this should be useful.

What are Principles of Persuasion?

One of the most famous books on sales and persuasion is Influence by Robert Cialdini. He lays out 6 key principles of influence and tells great stories about them. One of the best non-fiction books I’ve read.

I noticed that two of Cialdini’s influence principles are screaming out from the LinkedIn deck.

These influence principles are powerful because they’re ingrained in our DNA — unless you’re really conscious about these principles, you can’t help but be influenced by them.

So if you’re trying to persuade someone else (to fund your company or buy your product), using these principles is a good idea.

Social proof is the idea that we are more likely to do something, buy something, or “believe something is correct”, as Cialdini puts it, if we have evidence that other people think it’s correct.

You see this stuff all over advertising: “4 out of 5 dermatologists recommend…” or on a webpage “As seen on…(TechCrunch, Forbes, HuffPo, etc.)”

You know you’re seeing advertising but you can’t help it. It works.

What you’re not saying out loud is “I know TechCrunch and I trust it. If this company was featured in TechCrunch, then I trust them too.”

Here’s how Reid Hoffman does it in his pitch deck. It’s subtle but powerfully nonetheless.

There is a chunk of the deck (slides 4 – 8) where he makes a massive analogy to convince the investor that LinkedIn is capitalizing on a valuable movement: Web 1.0 vs. 2.0.

He says Web 1.0 was all about sifting through flat directories. That is, online classifieds, online payments, and web search were all done by looking at individual posts, transactions, or web pages in isolation.

Then he puts LinkedIn in that same boat: Traditional job sites are just a flat directory of people’s resumes, but LinkedIn is a network of relationships.

And by this point, how can you not believe that building a business on a networked web is a good idea? Google did it, so did eBay and PayPal.

Reid Hoffman calls this pitching by analogy, and he’s using the social proof principle beautifully when he does it:

What I especially like about this is that he doesn’t just say some pithy phrase like “We’re the Google of people”.

Investors hear that crap so often from so many shitty startups that if you say that, you have the opposite effect: you’re associating yourself with other “cute phrases, little substance” founders.

Instead, he goes through 4 slides to first get the investor to agree on a meta principle, then tie his company in with other well-known companies that rode that train to success.

This brings me to principle #2.

The commitment bias is also really powerful and ingrained in our DNA. When we commit to one (small) thing, we are subconsciously inclined to commit to other (bigger) things that are related.

For example, a non-profit that wants you to donate may first ask you to just sign a petition online. Perfect. Easy to commit to. But after that, you think “I’m an environmentalist. I already signed that petition. I’m committed”. So if they ask for a donation then? Much easier. You’ve already committed to them and those ideas.

Or a really sneaky (and unethical) application that Cialdini mentions is a used car salesman that quotes a price a few hundred bucks under the real price, gets you to commit to buying at that price then goes back to “process the papers” and shows up and tells you that oops, he made a mistake and the price is a few hundred bucks higher than he thought.

Guess what? Too late, you’ve already committed to buying that car. Now your brain is telling you, you’re an Accord driver, that’s what you are, you decided that, get the car.

The way Reid Hoffman introduces the LinkedIn analogy to Web 1.0 vs. Web 2.0 also uses this commitment principle in a subtle but powerful way (whether he realized it or not). He gets the investor to first agree on the idea that web 2.0 is network based, web 1.0 is flat, and thus web 2.0 is better and here to stay.

And he dedicates three slides to this!

Think about it, how many startup founders have three slides that don’t mention their own company anywhere in them? Not many!

Go through slides 4 through 7 and tell me that by slide 7 you aren’t completely sold on this idea.

By the time he introduces how LinkedIn fits into this movement you’ve already been convinced. You’ve already committed to the idea that a network based internet is here to replace the flat internet. All he has to do at that point is put LinkedIn in the same analogy and you’re sold.

How can you do the same?

Think about how you can use these principles to improve your pitch. It doesn’t have to be an investment pitch.

Can you relate your company or idea to other similar concepts and use Social Proof?

Can you do that in a rigorous way not just some cute phrase “We’re the Facebook of food!”

Can you get the audience to commit to a core concept first and then tie your company to it?